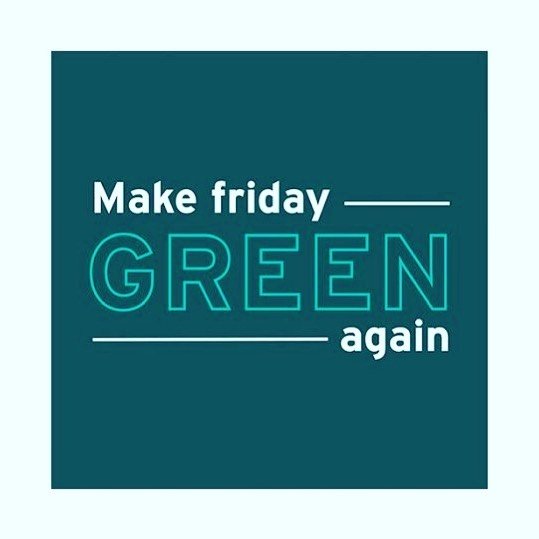 Even at the supermarket where I usually shop, there was the ‘Black Friday’ flyer the other day, which then the discounts in the end are the same as those of the classic periodic offers but this ‘Black Friday’ has leveled us so much that it seems to be useful also to sell bread and basic necessities.

Fortunately, there are those who oppose it. In France (they will also have their faults but for many things they are ahead) for some years now several movements and associations have been organizing to protest and boycott Black Friday with the aim of putting an end to the unbridled consumerism of a day that moreover, it is not even part of the European tradition, being made in the USA.

The Green Friday movement was born in 2017 on the initiative of Envie, a network of eco-friendly companies, to which over the years other founding members have been added such as Altermundi, DreamAct, Ethiquable and Refer, groups, networks, associations and other that collect ethical and made in France brands in all categories, from clothing to cosmetics to furniture and so on.

Every year in anticipation of Black Friday, the movement draws up a program of initiatives to sensitize consumers but also companies to responsible purchases and sales; this year at the end of October the ’30 days’ challenge was launched via Instagram, with a series of small gestures to be performed daily such as asking your favorite brand for its production methods or timing the time spent in the shower, all for provide simple clues and gather information on citizens’ habits and transform them into ‘consumer actors’.

In addition to this, on the last Friday of November or the day of the infamous ‘Black Friday’, the companies associated with the collective undertake not to offer discounts to their customers but to donate 10% of the turnover of the day to some chosen associations by the collective, while in turn the associations are committed to organizing responsible consumption awareness events during the renamed ‘Green Friday’.

On the same wavelength is the collective ‘Make Friday Green Again‘ launched by Nicholas Rohr, co-founder of the Faguo brand, to which more than a thousand brands have joined so far; the motto is to transform ‘Black Friday’ into a normal Friday, like all the others, possibly green, perhaps by recycling, repairing, decluttering.

The purpose is to consume when you really need it, without excess.

However, the latest news gives a postponement of ‘Black Friday’ in France due to the crisis due to Covid, so that all stores can reopen in an orderly manner and offer discounts for Christmas purchases.

But my idea is that the online giants especially benefit from Black Friday, Amazon in the first place, precisely those who have already billed millionaires and continue to not respect the rights of workers.

For them it is always Black Friday.