Home l’intervista del mese And this time I myself answer the monthly interview! 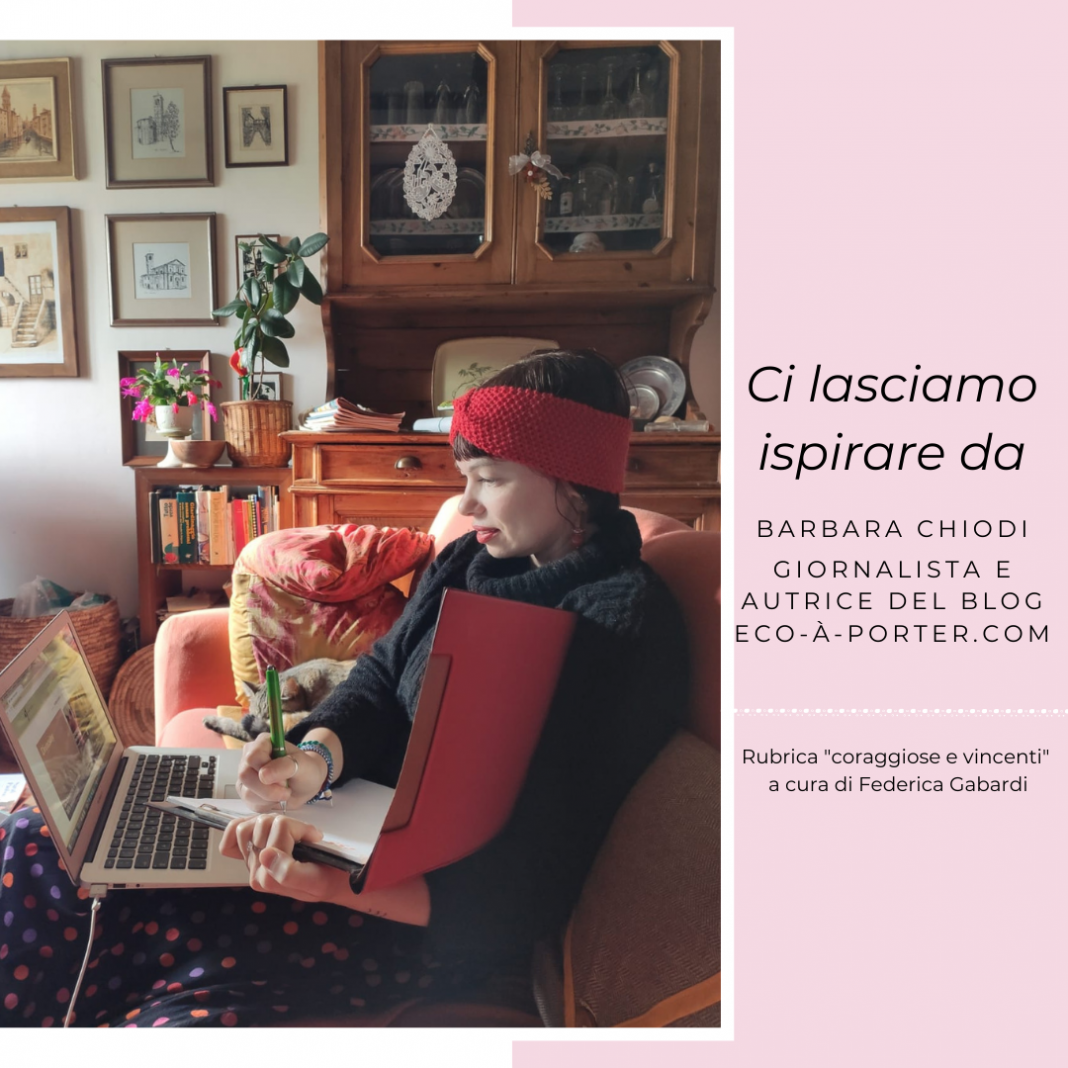 For this month’s interview I already had an idea (and I won’t tell you which one because it’s a surprise postponed to March) but then coincidence (but I don’t believe in coincidences) wanted something about us to come out today, something that concerns just eco-à-porter and myself. So I said : but why not self-celebrate a little, once in a while? Especially if self-celebration is not an end in itself but helps us and helps others, and in this case other women, to come out of ourselves, appreciate and / or be appreciated for our qualities, our talents, thanks to which we have achieved an important goal, so be it.

So today I am interviewing myself or rather I am reporting the interview that Federica Gabardi, trainer and empowerment coach for women based in Seattle, where she teaches Communication and Leadership at Community College, did to me for her column ‘Courageous and successful’.

I met Federica on LinkedIn and when she offered me this interview, my first reaction was “but am I ‘brave and winning’?” “Can I consider myself a superpowers woman ?” I retraced my life in time lapse but above all my last years, especially those that led me to open this blog and everything that has derived from it and I answered.

I have put all of myself into this project; after years and years of mental planning and a series of ruminations in which I carried on my activity as a freelance journalist doing a thousand transversal things, I felt that inside me there was always that urgency to do something concrete for what was close to my heart, that is, first of all, the animals and then the environment in which they live and all of nature.

In addition to being an animal rights activist, I said to myself: why don’t you create your own space in which realities that feel similar to your way of thinking can converge and find voices, brands, designers, companies with a passion for responsibility and environmental awareness and behind them , stories, many stories.

So alone, without Bocconi studies or prestigious masters behind me but only my long professional career and my passion, I threw myself into this blog adventure with body and soul and in the meantime, let’s say in the before and during between conception, incubation and ‘birth’, there was the earthquake that hurt central Italy and also the region, the Marche and the city where I live, Macerata, a deep personal and marital crisis that resulted in a very painful separation and Covid, with the lockdown and all what followed.

Problems, including economic ones, moments of stasis, crazy downs made me think I would not have made it, that this blog would run aground due to lack of opportunities, of possibilities, of many things. Instead we are, me and him, him and me, still here. This is why I said yes to Federica Gabardi. And this is our interview.

What fears did you face in your story?

I had been carrying the idea of ​​the blog with me for a long time; being already a journalist and dealing with fashion, the idea of ​​dedicating a space to ethics had been spinning in my head for a while, especially for my passion for animals (I’m an animal activist) and nature and after attending a course of environmental journalism in Rome in 2008. But somehow I did not feel ready and perhaps it was certain ‘fears’ that blocked me: the fear of not being able to manage it, the fear of failure, the fear of even a small economic investment , the fear that the message I wanted to send would not pass, that is, of sharing and disseminating virtuous practices linked to another fashion, made up of slow rhythms, lots of craftsmanship and stories to tell. And then, perhaps, the greatest fear, that of giving shape to the ‘project of life’ or rather that of maturity, as if it represented a sort of transition to a work of my own, conceived and created by me, over which I had full powers but also many responsibilities.

What superpower helped you?

More than one, I think, and mostly without my knowledge, because I understood in hindsight, that I had everything I needed to face this challenge within me. The great passion for the project certainly helped me, believing in it, feeling I wanted to do it not only for myself but to make my small contribution to change, feeling part of a revolution (because ethical fashion is this, a revolutionary movement !). Then a strong determination, the one “I wanted, very strongly I wanted”, that my mother tells me I said as a child, which goes hand in hand with enthusiasm and the ability not to be discouraged at the first difficulties.

Did anyone from outside encourage or support you?

Yes, I must say that the superpowers also came from the outside and not only from people I expected, family and friends but also from acquaintances or people who simply knew about the project and wanted to support me, like when I launched a crowdfunding campaign, at the beginning, to support the costs of web design and I received contributions from those who just did not imagine. It was a great satisfaction and gave me a further boost.

What would you say to yourself who is still thinking about embarking on this adventure?

Do it, because you have a great weapon on your side: passion. I know you, even in the past you have done and achieved great things because you believed in them and because the enthusiasm you put into making them also infected those around you, who in turn felt stimulated to support you. Do it because one day the thought of not trying will give you more trouble than any other hypothetical enemy.

Thanks Federica for this opportunity and for making me understand that I am a brave and winning woman! 💪🏼

Sara Maino, who opens the doors to new talents